It is important to note that there is no such thing as a "family coat of arms" . A coat of arms is granted to an individual and can be displayed by him and his descendents with due difference. Consequently, there is no O'Higgins/Higgins coat of arms that can be used by all members of the clan. The only way you can be sure to display a correct coat of arms is to become armigerous in your own right i.e. seek a grant of arms from the Chief Herald of Ireland or the relevant College of Arms in your own country.

Records show that historically at least two lines of O'Higgins are armigerous.

The earliest known coat of arms was recorded in 1724 by Sir James Terry, Athlone Herald in the Court of James II at St. Germaine. King James was in exile in France and took his herald from Ireland with him where he continued to record and grant arms to the native Irish nobles including the O'Higgins of Monteige who originated in Kilmacteige in Sligo. This branch of the family moved to Limerick after they lost their lands and eventually relocated in France and later in Spain where John Higgins was knighted and became personal physican to the King of Spain. The arms granted to O'Higgins of Monteige are shown here:

In 1788 Don Ambrose O'Higgins, Marqués de Osorno of the Ballynary line was confirmed with a coat of arms and crest by the Ulster King of Arms in Dublin. Records in the Genealogical Office in Dublin MS 165. p. 396-399 outline the pedigree of the Ballynary line as members of the Gaelic nobility and the grant of arms to Ambrose who was then a Brigadier General in the King of Spain's Army in Peru and Chile. The "Ballynary Arms" was certified in 2011 for Chief Thomas by the Cronsita de Armas de Castille y Leon in Spain and is shown here:

While both of the above Arms relate to different branches of O'Higgins, they both contain a griffins in the crest above the shield hinting at a common ancestry.

In 1790s under the orders of Ambrosio O'Higgins, the City of Osorno in Chile was rebuilt by General Juan Mackenna, and declared officially re-populated in 1796. In return for his efforts at Osorno and in Peru and Chile generally, Ambrose was made Vice-roy of Peru in the same year. He was also awarded the title of Marqués de Osorno and had a registered a new coat of arms. The arms which is shown below is quartered with the coats of arms from the four lines of Ambrose's pedigree as follows clockwise O'Higgins, Brehan, O'Conor, and O'Fallon. 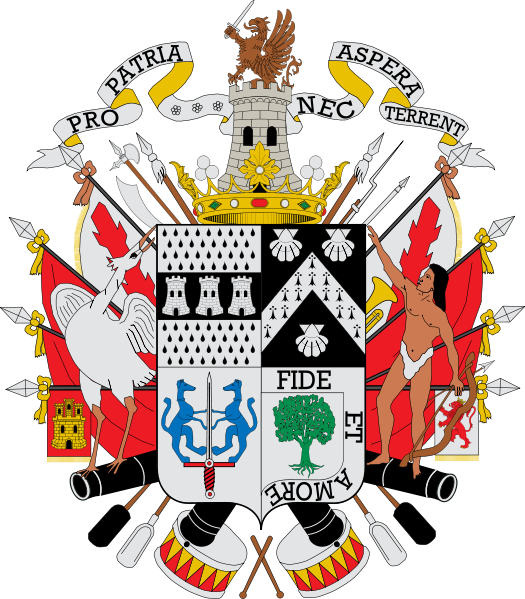 In 1956 the City of Osorno issued a decree confirming the above coar of arms as their official symbol.

Thank you to the Office of the Chief Herald, the British Museum and the City of Osorno and the O'Higgins family of Ballynary for permission to reproduce the above arms. Thank you also to Eddie Geoghan (www.araltas.com) for his heraldic graphics and to Mr. Geoff Kingman-Sugars for his advice.